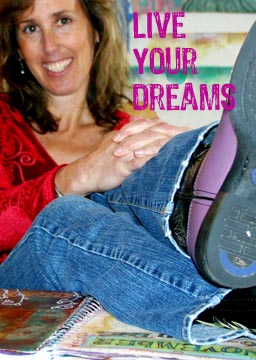 Artist, author, Feisty Female™ and facilitator of women's dreams, Sheri Gaynor
spent the first half of her life attempting-without much success-to walk the
straight and narrow cultural path. As someone with an insatiable curiosity, she
spent her early years trying on a lot of hats, trying desperately to make them
fit-photojournalist, rubber stamp artist, t-shirt designer and psychotherapist,
to name a few-attempting to figure out what she wanted to "BE" when
she grew up. The journey wasn't always an easy one and much was learned through
the school of hard knocks; a formidable education. Little did she know that by walking that wide, crooked and
creative road, she would find the trail to her authentic self and living the
life of her dreams.

In 1989, her mother Marilyn, daubed her a "Jewish American Pioneer" (JAP), when Sheri headed West to the Rocky Mountains, leaving friends and family
behind. Fortunately, the city girl met her mountain man shortly after arriving,
learning how to make fires in the snow, ski with free heels and most importantly
how to be feisty and fearless-no easy task.

As native New Yorker, the events of September 2001 had a
significant impact and left her questioning everything she had come to know.
The result was a reflection of core values and a deeper understanding that life
was short and time was precious. It was at this moment her husband came up with
their next plan, a Sabbatical across America in a 24-foot trailer, living
outside the cultural box to spend time with ailing family and friends.

It was
on the road with the mountain man and their black lab-that Sheri read the poem
for the first time, "What is calling you," and it became the mantra
of her daily life. During this amazing adventure, meeting others living life
outside the cultural box, she had her creative epiphany, finding the answer to
the question and there was no going back…so to speak. As a result she has
dedicated her life to helping other women find their authentic selves and reach
for their deepest dreams through the company she founded Feisty Females
Coaching and Consulting. Sheri's first book, Creative Awakenings: Envisioning the life of
your dreams through art, will be published by North Light Books in February
2009.

Described by an early reader as, "The law of attraction,
meets the artist's way."  Part
memoir, part life guidebook and part creative how-to, the book is divided into
three unique parts. Part one, The EnVision Process, teaches readers the Art of
Intention™-a contemplative practice they can use as a tool to create positive
intention in their daily lives and awaken their innate creative potential. Part
two, Twelve Months of Dreams, depicts the year-long journey taken by 12
nationally known artists who used the EnVision process in their daily lives.
Each artist created an art of intention mixed media piece and wrote an essay
about their transformative experiences. Part 3,The Transformation Deck,
utilizes a transformative deck of cards (enclosed in the book). Each card is
illustrated with a one-of-a kind mixed-media painting created by the author,
and will take readers on a creative adventure using visual journaling, creative
exercises, challenges and activities.

Sheri Gaynor is a Licensed
Clinical Social Worker, Registered Expressive Arts Therapist and
professional Life Coach. In 1981 she received her Associate of Arts degree from
the Art Institute of Ft. Lauderdale, with a major in photography. She received
her Masters in Clinical Social Work from Barry University in 1989.  Sheri's art has been shown
internationally and she has contributed various freelance writings and
photographs to such publications as the Miami Herald, the Sun Sentinel, the
Florida Post newspapers and the Aspen Times Weekly. Sheri has been
leading women to creative success for almost 20 years. She does this through
her company Feisty Females™ offering women, individual transformational
coaching, on-going creative expression workshops and retreats.